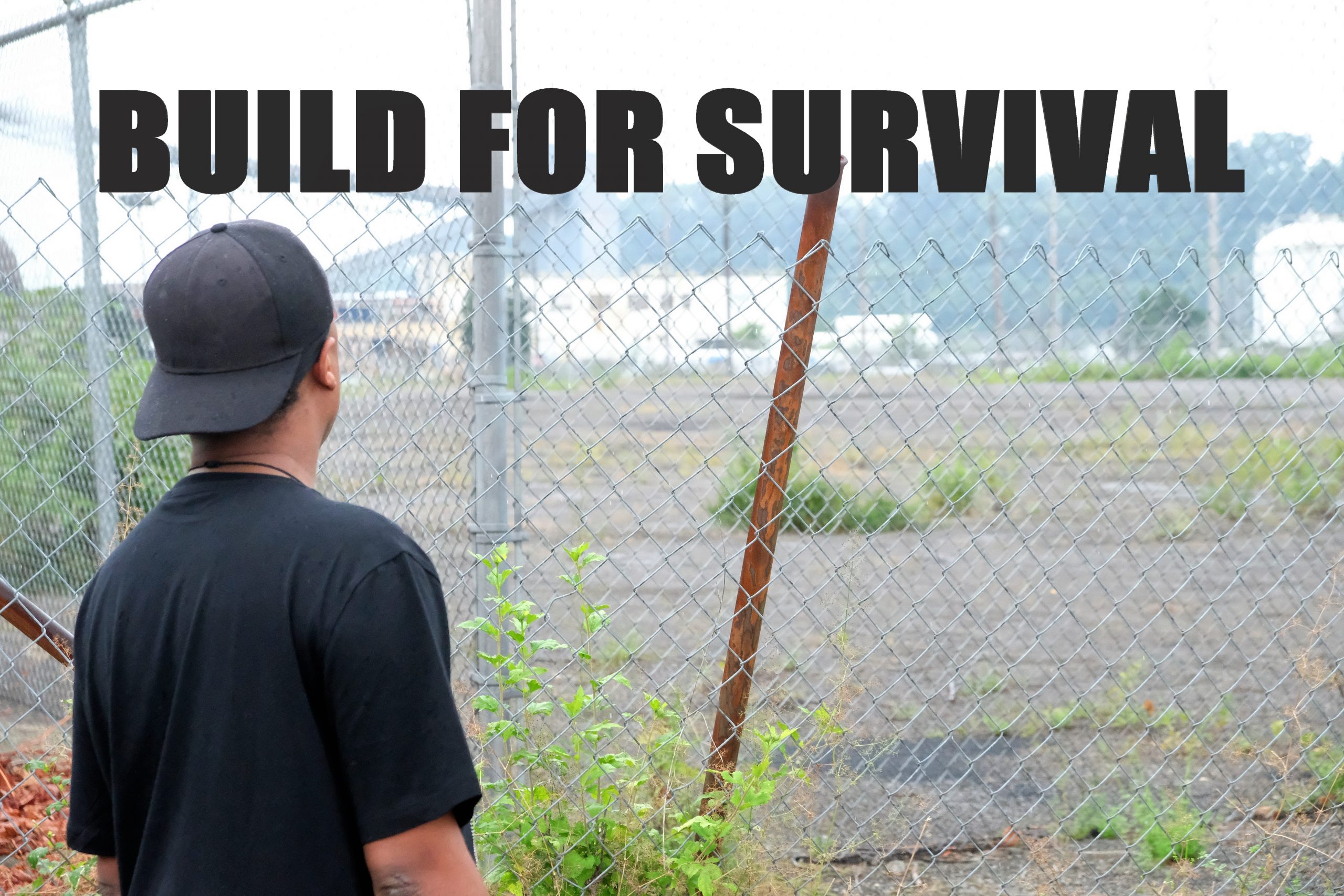 Build for Survival: The ongoing fight for human rights and Economic inclusion
BUILD FOR SURVIVAL was created to raise capital from the public for the development of a high-quality, world class human services “incubator Space” in Braddock, PA. A space that is specifically being designed for and accessible to all those who are being excluded, redlined and locked out of all emerging opportunity in our community. Bridgewater Capital estimated the cost to develop this facility at around $250,000. Build for survival is the latest effort in this organizations founders decades long battle to have the community redeveloped in ways that reflect, up life and include the community’s majority Black, marginalized population.

Decades before Pittsburgh was considered a technology hub, before there was a Halzelwood Green, Silicon Valley of the East, Uber, a Mayor John, Bakery Square, “Capital projects” philanthropic developer foundations or the dream of Amazon coming to Pittsburgh, Braddock Inclusion Project founder, Isaac Bunn, was already, unknowingly, advising county officials, world-class local universities and others on how the region should and could evolve. How the regions undesirables could Build for survival in their own communities.

He was submitting ideals, developing sustainable solutions, securing privet investors and had garnered the support by many at Carnegie Mellon University and Robert Morris university on plans to redevelop deteriorated, government neglected, blighted land surrounding his family homestead. He was on track to receive a $25,000 grant from the Sanders micro imitative, supposedly secured the blighted land in question through the vacant lot program and was told that the plan was approved by the Local council. Things seemed to be heading in the right direction.

That was until local county authorities reviewed the submission and found out that they weren’t involved and that the plan was for the advancement, economic survival and social uplifting of a majority Black community. A community that, up until that very moment, had been left abandoned, red lined and neglected for decades at the local, state and federal level. All the sudden, after reviewing Bunn’s proposal, the county decided that they too wanted to do the same. Next came the Orange signs proclaiming that the county was “land grabbing” the entire Block. Since that time, nearly two decades, the entire Block has sat empty with Bunn’s family home Fenced or red lined out. In the interim the county funded $25,000 check never came, the deed for the purchased blighted land never came, Bunn’s submitted proposal to the county vanished and a clerical error in the form of a false “felony conviction” magically appeared on Bunn’s criminal record that wasn’t discovered until twelve years later.

These intentional and horrific ongoing practices are nothing new, but it is worth reiterating this story so that we can use this moment in time as an opportunity to start the conversation and move forward. To directly confront the institutional and structural racism that continues to thrive off, consume and destroy Black lives along with their community. It is essential for those who are for human rights and connected to power to take a stand. It time that Black individuals, their institutions and organizations not continue to allow their ideals and contributions to society to be co-opted by the dominate structure only to then have those same ideals and solutions used against them. Thus, keeping them in a permanent underclass, dependent on the dominate structure to approve and implement the very solutions that are being collected, discarded then reused to the benefit of the dominate society.

Recently at the official opening of Braddock’s new civic plaza, a green space where one of the communities most important and largest employers, UPMC Braddock hospital once stood, it’s very difficult to understand just whom Governor Tom Wolf was speaking of when he said, “If you want to know what it’s like to bring a community back, come to Braddock. Come to see what you all have done in this community.” Or the current Mayor, who happens to be white, say “We have come back much stronger than we were with the hospital”. Just who are the “You All” and “We” that they are referring too? When UPMC demolished the hospital, the land was acquired by the Redevelopment Authority of Allegheny County, which then designated TREK Development Group the site developer.

Even more infuriating is hearing someone say, “the plaza was part of a community vision “and “When we asked the community in 2011 what they wanted from the site of the former hospital, there was overwhelming support for a green space”. At the few meetings that did take place, which most of the community had no clue that they were taking place, the options were limited to the three (3). Those three options were already predetermined and “handpicked” by a select few and all three included the development of housing. There was no community involvement in the actual development planning and the overwhelmingly support was determined by a very small number of community members voting on limited, predetermined options.

At the time Mr. Bunn fought hard for and submitted a plan for a jobs creation, technology development incubator space for the abandoned site. At that time, He felt that it made no sense to develop housing and a green space in a community that was and still is one of the poorest communities in western Pennsylvania. To be clear there was very minimal community input and the development plan was put together by a very small “handpicked” network of organizations that all would benefit from it. In these trying times majority Black communities, on the brink of gentrification and economic annihilation can no longer just sit by idol and accept business as usual. To allow over a decade of “feel good” narratives to mask the truth.

Black Americans have always faced extreme systematic challenges in narrowing the wealth and wealth distribution gap here in America. The wealth gap persists regardless of households’ education, marital status, age, or income. Black Americans started off generations behind, only to then encounter the redlining and racially restrictive housing covenants of the early-to-middle 20th century, which prevented the sale of land or homes to Black Americans and isolated them together in communities that lost value over time because of intentional neglect and disinvestment as white residents fled to the suburbs.

This enormous wealth gap is a result of the institutionalized and exclusionary obstacles that Black American’s have always faced in building wealth and thriving communities. The persistent racial wealth gap and denial to vital life sustaining resources leaves Black Americans in an economically precarious situation and creates a vicious cycle of economic struggle, poverty and the violation of basic human rights. This lack of wealth means Blacks Americans are less economically mobile and therefore unable to grow their wealth or communities over time. Improved access to higher education alone, while important, will not be enough to create equal opportunity in terms of wealth-building for all.

Entrepreneurship, trades skills training and technology training can be an avenue to wealth building, yet it often requires wealth that Black institutions, individuals or families don’t have or have access to. Life sustain, quality of life building capital that Black Americans have traditionally been denied. This denial is a product of intentional systematic policy choices created to benefit those who created them. The only way to correct this wrong is to make intentional systematic changes in response. Only broad and persistent policy attention to wealth creation can address this glaring inequity. One of the solutions is to invest in a 21st-century Black American middle class. At this very moment in time we need to make sure, for the first time in our country’s history, that we are investing in a middle class that includes majority Black individuals, institutions, business and communities. This has never been done before.

With the historic election of Summer Lee, our communities new State Representative, we feel that finally we have a legitimate seat at the table with someone who can relate to the community and will fight to advance the narrative, without it being watered down or drowned out by local elected puppets, the county or foundations, that we need sustainable jobs, economic opportunity, superior education and the resources needed to establish these basic human rights. This organizations Build for survival campaign represents an opportunity for that systematic change to take place here in the community. Here at ground zero. Summer Lee has committed to working with this organization and making it a part of the plan instead of excluding it. It’s a great day for the community because it means that this organization and other’s in the community will have options and opportunity’s that have historically been unobtainable, barring a select few. It means the voices, hopes and dreams of the community’s marginalized and discarded won’t get swallowed up by outsiders, local foundations or corrupt leadership, many only seeking to advance themselves or their own agendas.

When Andrew Carnegie built his first Steel plant here in Braddock, PA over 100 years ago, it was in an innovation economy. It was considered state of the art—and it moved the nation into the 20th century. It was all made possible by the untold story of Black American steel workers and their life-giving contributions.
Only a Block away from Carnegie’s historic site, on land that’s been in Bunn’s family for decades and that he’s fought hard to hold onto, is the focus point of our Build for survival campaign. Our proposed Build for survival development will highlight the untold story and contributions of the Black American steelworkers of the past and will be a model for the sustainable redevelopment of majority Black communities across the country. As Bunn has been saying and fighting for for decades, we want to create a new model for the sustainable redevelopment of a majority Black community that will benefit the marginalized, uplift their quality of life, foster self-sufficiency and advance to restore our community’s place in the global innovation economy.

The immediate solution is for those looking to build a more inclusive America to invest in Black American.That we are investing in majority Black communities, institutions, business, individuals and families. Unfortunately the process of it ever coming to realization will start with ordinary everyday individuals not beholden to a structure build on oppression and exclusion. Taking back our society, communities and restoring human value starts at the kitchen table in our homes and in our communities. Please consider contributing or even better, becoming a proactive independent social fundraiser for our build for survival campaign. No amount is to small and every cent counts. Please visit links below to help and for more insight.

“I came to Braddock because I missed a sense of community organization and sensed I could help, though I wasn’t sure how. There are obviously things I’m trying to get out of this project, I am excited to have a chance to be a part of something histor… END_OF_DOCUMENT_TOKEN_TO_BE_REPLACED

“Braddock Inclusion Project consists of brave leaders ready to impact Braddock residents by promoting inclusion. Their recent efforts towards ending poverty and opening opportunities of growth for civilians are strides toward a just world, which EV… END_OF_DOCUMENT_TOKEN_TO_BE_REPLACED

The website and its content is powerful. Congratulation. I know it is the most honest dreams that take the longest to manifest because they are guided by the heart and soul and not by greed. Thank you for your work – it is imperative that it exists i… END_OF_DOCUMENT_TOKEN_TO_BE_REPLACED