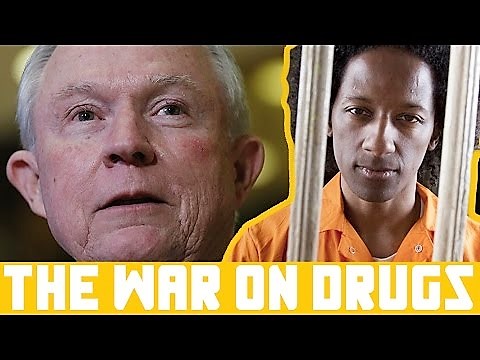 We can’t talk about the War on Drugs without talking about the criminal justice system. When you talk about arrests for drugs, illegal traffic stops and killings of unarmed individuals you have to talk about how the dominate society view other people. You must talk about a system that’s riddled with racism. The deeper you go into the system, the deeper the disparity.

Launched by President Richard Nixon in 1971, the initial War on Drugs has resulted in the incarceration of an estimated one million Americans each year for drug offenses. It has especially  had a devastating impact on the Black community.

A slew of statistics demonstrating racial disparities in the criminal justice system as related to the investigation and prosecution of drug offenses have been collected. There are also disparities in sentencing and incarceration rates and how the “War on Drugs” has led to these disparities. These and other sentencing rates not related to Drugs are systematically erasing Black life in America.

Massive incarceration rates of Black Americans, a depressed economy where Blacks are denied opportunity, and the widespread violence is something that should alarm everyone, even those of us who have never been the target of a midnight no-knock raid or a life shattered by drug violence, police abuse, or the myriad other tragedies this unjust war on drugs has brought upon Black society. It’s hard to imagine Black America surviving a revamped War.

It doesn’t take a brain scientist to figure out what’s happening. The jobs, culture and opportunity have been removed from Black communities and the drugs, gentrification and the privileged are moving in.  Black lives are at stake. Black America is in a state of emergency.

Police practice of using the traffic laws to routinely stop and detain Black motorists for the investigation of crime in the absence of probable cause or reasonable suspicion for the stop. There is reason to believe that this is a widespread practice performed by police officers throughout the nation. Many prominent African Americans have reported being victimized by these stops. Although they have unfortunately become routine, such stops and detentions are by their very nature invasive and intrusive. These violations will continue to lead to the killings of many innocent Black Americans and has rose to a human rights crises.

By almost any measure, the war on drugs impact on African American communities has been devastating. Millions of African Americans have been imprisoned, many have been unfairly treated by the criminal justice system, the rights of both legitimate suspects and average citizens have been violated and the quality of life of many millions more has been adversely affected. These effects are the consequences of deliberate decisions; first, to fight a ‘war’ on drugs, and second, to fight that war against communities populated by people of color.

researchers found that the race of the victim was the determining factor in whether a defendant received a harsher sentence. Racial discrimination in sentencing can only be worsened by efforts to make sentences tougher and harsher.

“Braddock Inclusion Project consists of brave leaders ready to impact Braddock residents by promoting inclusion. Their recent efforts towards ending poverty and opening opportunities of growth for civilians are strides toward a just world, which EV… END_OF_DOCUMENT_TOKEN_TO_BE_REPLACED

“I came to Braddock because I missed a sense of community organization and sensed I could help, though I wasn’t sure how. There are obviously things I’m trying to get out of this project, I am excited to have a chance to be a part of something histor… END_OF_DOCUMENT_TOKEN_TO_BE_REPLACED

The website and its content is powerful. Congratulation. I know it is the most honest dreams that take the longest to manifest because they are guided by the heart and soul and not by greed. Thank you for your work – it is imperative that it exists i… END_OF_DOCUMENT_TOKEN_TO_BE_REPLACED