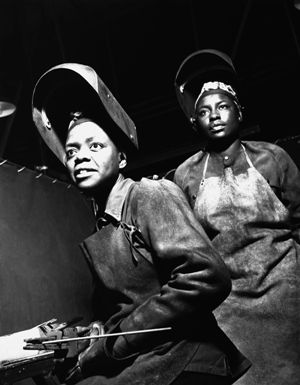 Black American steelworkers’ story and their history must be preserved. Their sacrifice and struggle against apartheid-like conditions in the steel mills and communities surrounding them are rarely if ever mentioned.

The little-known history of Black American steelworkers is a story of racism, grueling work combined with heart-breaking discrimination and unfulfilled potential. It is the story of skilled ex-slaves who worked in iron mills of the South. Originally recruited by employers to break the strikes of Northern steelworkers, they faced second-class conditions, the hostility of white workers and their unions.

Since they were often the highest-paying jobs available to Black American workers, these same workers were given the toughest, dirtiest, and most dangerous jobs the so-called “man-killing” jobs.

The Black American steelworkers, many of whom joined the mill after fighting for their country in World Wars I and II, faced discrimination and severe racism from both their employers, White coworkers and their union and found that their chances for advancement, despite their education, qualifications, or experience, were repeatedly thwarted.

Before the Civil War, more than 2,000 slaves worked in the iron mill of the South, creating a skilled work force that the Northern iron companies were quick to exploit after the war. When a labor dispute shut down the industry in Pittsburgh in 1875,

Black American workers were brought in to break it, setting a pattern that would continue for decades. Strike breakers were resented by whites for working for lower wages and, at that time, unions were not willing to accept Black. In 1890, a union local in Pittsburgh ordered 400 of its 500 workers of their jobs to protest Black American employees.

Black American workers were flocking to the North not so much as strike breakers, but to escape natural disasters (the boll weevil scourge of 1914, the floods of 1916), racial oppression and the repressive class system of the south. Like the Eastern European immigrants who also were moving into the mills at this time, Black Americans shared one dream — the chance for equal opportunity.

Discriminatory work practices sanctioned by the union, including department seniority rules kept these workers in hazardous, low-paying “Negro Man Killing Jobs,” for decades, continuing uninterrupted through the years of civil rights activism in the 1960s. As one veteran Black American steelworker recounts, “A white man would come in and you had to train him. In two weeks — he was your boss.”

Through the years of partial gains and tremendous losses, Black American steelworkers’ activists came to trust the government far more than the steel companies. Following a series of lawsuits based on Civil Rights legislation, a consent decree was brokered in 1974 by the Equal Employment Opportunity Commission (EEOC), the United States Department of Justice, nine steel companies and the United Steelworkers of America.

The decree established goals and timetables for the hiring and promotion of minorities, specifically Black Americans, women, and Hispanics, particularly in supervisory, technical, and clerical jobs and management training programs. The decree eliminated department seniority and replaced it with plant-wide seniority as the basis for promotions, demotions and recalls in the industry.

But as usual this moral victory, however, did not translate into lasting employment gains for Black American steelworkers. By the 1980’s, the industry decline had decimated most steel jobs in America, important gains attained by more than a century of steel employees and a new Black American labor movement fell by the wayside, as both Blacks and whites stepped together onto the unemployment line.

So, yet again, just as Black American steelworkers were granted long-overdue workplace rights, the mills closed, turning once-thriving middle-class communities into Black wastelands. And so, the story continues in 2020 America

This organization believes we need to preserve this history. Many of those workers who survived and had the chance to retire, did not have long to enjoy it due to the severe conditions that they had to work in. Most died within a few years of retiring.

Black children and future generations need to know about their forefathers’ spiritual and moral values, their intense pride in self-development, using common sense, educational commitment, and their ability to survive through extreme Racism, discrimination, and economic depression.

To honor them, this organization, in our new development proposal, is dedicated to including the first of its kind, “Black American Steelworkers History Museum” on the site. The site where we are looking to build our operations facility is fitting because it is only a Block away from Andrew Carnegie’s first ever Steel mill in a community that was built on steel.

Please join us in our efforts to see this project through by visiting the links below, sharing them, this story and by doing whatever you can to be a part of the solutions that bring lasting justice, peac and healing to Americans most victimized andvulnerable residents.

“I came to Braddock because I missed a sense of community organization and sensed I could help, though I wasn’t sure how. There are obviously things I’m trying to get out of this project, I am excited to have a chance to be a part of something histor… END_OF_DOCUMENT_TOKEN_TO_BE_REPLACED

“Braddock Inclusion Project consists of brave leaders ready to impact Braddock residents by promoting inclusion. Their recent efforts towards ending poverty and opening opportunities of growth for civilians are strides toward a just world, which EV… END_OF_DOCUMENT_TOKEN_TO_BE_REPLACED

The website and its content is powerful. Congratulation. I know it is the most honest dreams that take the longest to manifest because they are guided by the heart and soul and not by greed. Thank you for your work – it is imperative that it exists i… END_OF_DOCUMENT_TOKEN_TO_BE_REPLACED