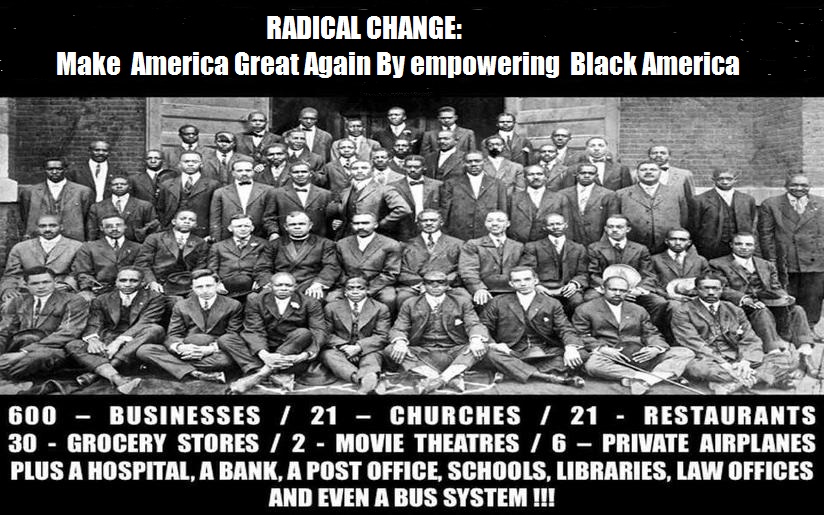 Generation after generation of useless federal, state, and local policies has quarantined Black Americans in poor isolated slums. The call for “Hope” must now give way to demands of Radical Change. There is no denying that government—federal, state, and local—have intentionally employed explicitly racial laws, policies, and regulations to ensure that Black Americans would live impoverished, at the bottom of society and separately from whites. This is Reality.

White institutions created these laws and policies, white institutions maintain them, and white society condones them. Although many white Americans say they’re for radical change and for improving the conditions that Black Americans face but the reality is that behind closed doors none of them would trade places with those suffering at the bottom of society. Who could blame them.

To understand why you must understand how people come by wealth in the first place. It’s popular for the ruling structure to say they build wealth through discipline — by hitting the books, working hard and saving money. The reality is a little different. The reasons are more attached to slavery and the fact that at one point Black Americans were considered sub human therefore purposely excluded from the laws at the very beginning. This along with the cumulative effects of centuries of gross economic disadvantages that Black Americans have endured, from slavery to Jim Crow and beyond.

These  disparities are rooted in historic injustices and carried forward by practices, laws and policies that fail to reverse inequitable trends and instead focus on the preservation, prosperity and survival of the ruling structure. As a result, racial wealth disparities, like wealth inequality overall, continue to grow. By purposeful action of government in violation of the Fifth, Thirteenth, and Fourteenth Amendments the dominate structure continues it’s viscous culture of racial divide and the systematic erasure of Black life in America. These constitutional violations have never been remedied, and Black Americans are paying the price tremendously.

The U.S. racial wealth gap is substantial and is driven by public policy decisions wealth, race . Radical change must now be demanded by leaders on the local level.

Decades of unfair  policies have intentionally fostered the conditions we are witnessing today in cities all across America. Policies such as redlining, restrictive covenants, and other blatant forms of discrimination are illegal, yet the modern iteration of segregation and racism persists through subtle and race-neutral, but just as insidious, policies. The result of these policies has been to constrain the mobility of low-income Black families. Poor housing and access to resources means fewer opportunities and insufficient access to transportation, quality schools, and jobs. Even black children born into middle-income families are  twice as likely to be downwardly mobile

The barriers Black Americans face are the result of invisible, insidious force of  intentional and unconscious bias. Whether it is water quality in Flint, school quality in Ferguson, environmental hazards in Dickson, Tennessee, Gentrification in Braddock, PA or the inferior health care that the majority of Black patients receive nationwide, the Black American experience is far different, and is allowed to be different, more than would ever be accepted within white communities. Racial injustice and inequality is a problem not just for poor and low-income Blacks Americans, but for moderate income Blacks Americans as well.

In Baltimore in 1910, a Black graduate of Yale Law School purchased a home in a previously all-white neighborhood. The Baltimore city government reacted by adopting a residential segregation ordinance, restricting Black Americans to designated blocks. Explaining the policy, Baltimore’s mayor proclaimed: “Blacks should be quarantined in isolated slums to reduce the incidence of civil disturbance, to prevent the spread of communicable disease into the nearby White neighborhoods, and to protect property values among the White majority.”

Thus, began a century of federal, state, and local policies to quarantine Baltimore’s black population in isolated slums—policies that continue to the present day, as federal housing subsidy policies still disproportionately direct low-income black families to segregated neighborhoods and away from middle-class suburb across America. The federal government has  maintained and sustained a policy of segregation in public housing, economic access and social standing nationwide for decades. The time for justice is now. Radical change must occur.

In the last 50 years, the two societies or two America’s have become even more unequal. Although a relatively small Black middle class has been permitted to integrate itself into mainstream America, those left behind are more segregated now than they were in 1968. Generational wealth functions as a financial safety net that enables families to deal with unexpected expenses and disruptions of income without accumulating substantial amounts of debt. At the same time, wealth can improve the prospects of the next generation through inheritances or gifts. Inter-generational transfers. Black Americans must now demand access to the economic resources needed to repair the damage caused by the hoarding of the American Dream by the ruling structure. Resources that should be released unconditionally and with no strings attached for there would be no dream  had it not been for the almost 500 years of free labor provided by slavery.

The radical change that this organization demands is not build on racial divide, hate or destroying the survival of the current ruling party but instead a sincere appeal directly to whites. Especially those whites who feel threatened by Black Americans, immigration, crime, trade, and diversity. Those who understand that nothing done in the past has worked and that things are getting worse. To those who are attached to the ruling class.

Many of the powers and resources needed to make immediate progress already exist; they simply need to be used. The massive accumulated wealth that’s being hoarded by the ruling structure can play a pivotal role in helping Black America to redevelop their own communities, finance higher education, develop new educational structures, developing economic stability, supply a down payment\ purchase a first home or to have  start-up capital for launching new businesses in their own community. Together, “we the people” must work to rectify current policies, while actively promoting new ones. To connect communities to opportunity, we should adopt economic and social inclusionary solutions. Instead of promoting upward mobility by attempting to diversify wealthy communities through federal grants use those very grants to promote upward mobility in the vanishing Black American community. To allow Black Americans to redevelop and control their own communities.

These efforts, and others like them, are necessary for reversing the impact of generations of discriminatory laws, practices and polices. Radical change must occur ASAP!! Please help by visiting our donate page. Stay connected for more updates.

“I came to Braddock because I missed a sense of community organization and sensed I could help, though I wasn’t sure how. There are obviously things I’m trying to get out of this project, I am excited to have a chance to be a part of something histor… END_OF_DOCUMENT_TOKEN_TO_BE_REPLACED

“Braddock Inclusion Project consists of brave leaders ready to impact Braddock residents by promoting inclusion. Their recent efforts towards ending poverty and opening opportunities of growth for civilians are strides toward a just world, which EV… END_OF_DOCUMENT_TOKEN_TO_BE_REPLACED

The website and its content is powerful. Congratulation. I know it is the most honest dreams that take the longest to manifest because they are guided by the heart and soul and not by greed. Thank you for your work – it is imperative that it exists i… END_OF_DOCUMENT_TOKEN_TO_BE_REPLACED