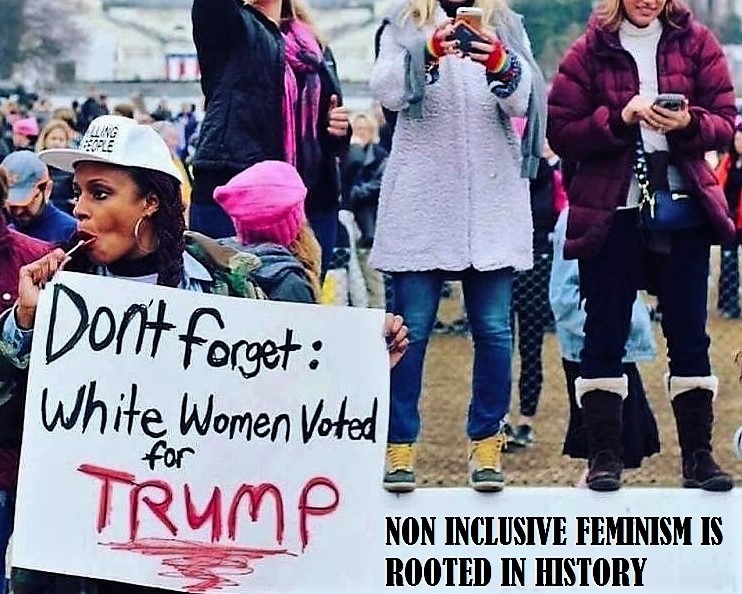 We’er all the same have never served Black woman well in America and non inclusive feminism is rooted in  history. The feminist movement has been around since the late 1700s and has resurfaced in many time over the years.  In 2017, for Black woman, it’s nothing more than a passing fad. The issues the feminist movement are combating didn’t and don’t always apply to the majority of Black women.

During what University of South Carolina Beaufort sociology professor Deborah J. Cohan characterizes as “a moment of potential racial reckoning, for feminism and the larger American culture,”many questions loom over the Women’s March planning and lingered in its aftermath. Since non inclusive feminism is rooted in  history there’s no reason to believe this time it will be any different. Even as Lehigh University’s Monica Miller  explained  that A  intersectional feminist approach understands that categories of identity and difference cannot be separated and doesn’t abandon one category of analysis such as gender or sexuality in favor of analyzing others such as race, and class small fault lines were revealed, as the New York Times reported in early January that some white women were put off by discussions of race and racism on the march’s Facebook page and decided not to attend.

The feminist ﬁght to step out of the home and into the workforce  for competitive wages is not the Black woman’s ﬁght. Working outside of the home is a cornerstone of the feminist movement. From the ’60 to the ’80s, feminists fought for their right to enter the workplace. Black women have always been a part of the workforce because they had no choice but to be. Before it’s destruction, due in large part to the feminist movement’s of the 60’s and 70’s, both parents in Black families across America have always worked. Black America woman have been working every since they stepped foot off the cotton fields.

Even when white female’s were stay-at-home moms, they weren’t the ones doing the cooking, cleaning and raising of children. Black woman were. Non inclusive feminism is rooted in history. The stay-at-home mom and government recipient who is present today is not the one who was a reality in the ’60s, ’70s and ’80s when the movement began. Many of these white women were not solely in charge of running their homes and raising their children. They had Black women, as hired help, to do most of the hard housework for them.

Lastly, non inclusive feminism is rooted in history because the feminist movement’s ﬁght against patriarchy doesn’t apply to Black people.Black men have little to no patriarchal power to exercise over Black woman. Black women are graduating at higher rates. Black women are the majority heads of households in the black community, in many cases has a higher income and are employed at a higher rate than Black men. For Black women to say that they are ﬁghting against patriarchy via the feminist movement would makes no sense.