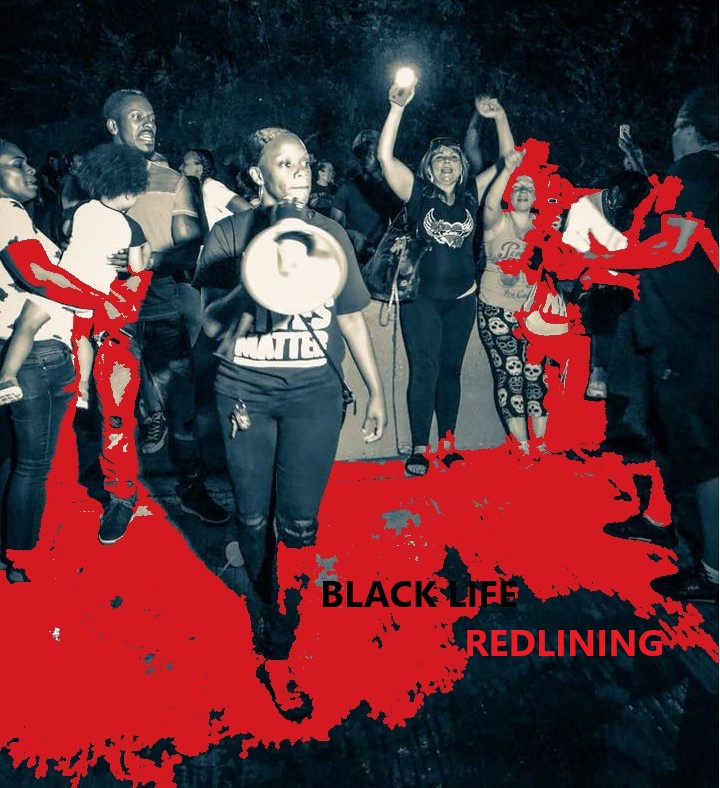 Black life redlining is woven into American culture. And now, here in 2018, for Black Americans it means America’s dominate structures are shutting and pad locking the door. The dog whistles are being sent out everyday from the highest office in the land, signaling that the End game is near.

Although Black life redlining, discrimination the separation of Black family structure and segregation has always existed in the United States, the specific practice called “redlining” began with the National Housing Act of 1934, which established the Federal Housing Administration (FHA). Racial segregation and discrimination against minorities and minority communities pre-existed this policy. The implementation of this federal policy aggravated the decay of minority inner-city neighborhoods caused by the withholding of mortgage capital and made it even more difficult for neighborhoods to attract and retain families able to purchase homes. The assumptions in redlining resulted in a large increase in residential racial segregation and urban decay in the United States.

This modern-day redlining persisted in 71 metro areas even when controlling for applicants’ income, loan amount and neighborhood, according to a Home Mortgage Disclosure Act records report in 2017. The report found a pattern of troubling denials for Black Americans across the country, including in major metropolitan areas such as Pittsburgh, Atlanta, Detroit, Philadelphia, St. Louis and San Antonio. Black Americans faced the most resistance in Southern cities.

The disproportionate denials and limited anti-discrimination enforcement help explain why the home ownership gap between whites and African Americans, which had been shrinking since the 1970’s, has exploded since the housing bust and Great Recession. The gap is now wider than it was during the Jim Crow era. This has far-reaching consequences for those facing Black life redlining.

For generations of white American families, home ownership has been a fundamental means of accumulating wealth. Their homes have grown in value over time, providing security in retirement and serving as an asset against which they can borrow for education or other purposes. But Black Americans were essentially shut out of early federal programs that promoted home ownership and financial well-being — including the all-important New Deal mortgage insurance system that generated the mid-20th-century home ownership boom. This opportunity to amass wealth that white Americans took for granted is evident to this day in the mind-blowing Black-white wealth gap and in worse health, living conditions and educational opportunities for Black Americans.

As enslaved people Black Americans were unable to take advantage of the Homestead Act, under which the government encouraged westward migration by giving away tens of millions of acres — to settler citizens. Former slaves gained full citizenship with the 14th Amendment and became eligible for land grants, but that right became irrelevant with the collapse of Reconstruction, the rise of Jim Crow and the limitations on the rights of Black Americans that the Southern states placed in their constitutions.

The pattern of Black life redlining and exclusion continued into the Great Depression, when programs aimed at rescuing homes from foreclosure were carried out in a patently racist fashion. The Homeowners Loan Corporation, established in the 1930s to refinance mortgages, set a discriminatory pattern when it drew lines around Black communities and decreed them unsafe for federal investment. That system of exclusion was picked up with disastrous effect by the Federal Housing Administration, created in 1934 to encourage home ownership with federally backed mortgage insurance. A 2017 study by the Federal Reserve Bank of Chicago found evidence of a long-run decline in home ownership, house values and credit scores that persists to this very day in the formerly and current relined communities.

These were founding Farther, self-fulfilling prophesies, as “hazardous” neighborhoods — “redlined” ones — were starved of investment and deteriorated further in ways that likely fed white flight and rising racial segregation. Historically Red lined Neighborhoods Have the Highest Share of Black Residents to this day. The government’s efforts were primarily designed to provide housing to white, middle-class, lower-middle-class families. Black Americans were left out of the new suburban communities and pushed instead into urban housing projects. Essentially local, state and federal housing and other policies has always mandated segregation.

Endless studies and reports show that racism in America exists, whether you want to believe it or not. Institutional Racism Is a way of life in America. In the wake of the recent Antwon Rose Jr. police killing in Pittsburgh, past incidents in Baltimore, Ferguson, New York City and elsewhere, most of us are aware of the nature of police violence against the Black community. But the humanitarian crisis associated with Black life redlining surfaces in every aspect of daily life for Black Americans. Day in and day out.

Black preschoolers are far more likely to be suspended than white children. Black children make up 18 percent of the pre-school population but represent almost half of all out-of-school suspensions. Once you get to K-12, Black children are three times more likely to be suspended than white children. Black students make up almost 50 percent of all school expulsions, and more than two thirds of students referred to police from schools are either Black or Hispanic, says the Department of Education. Even disabled Black children suffer and can’t escape from institutional racism. About a fifth of disabled children are Black – yet they account for 44 and 42 percent of disabled students put in mechanical restraints or placed in seclusion.

When juveniles hit the court system, it discriminates against Blacks youth as well. Black children are 20 times more likely to be sentenced as adults than white children and make up nearly 60 percent of all children in prisons, according to the APA. Black juvenile offenders are much more likely to be viewed as adults in juvenile detention proceedings than their white counterparts.

Black life redlining is rampant in the workplace. Black American college graduates are twice as likely as whites to struggle to find jobs. The jobless rate for Blacks Americans has been triple that of whites for decades even as the Government is reporting record low unemployment. A study even found that people with “Black-sounding names” had to send out 50 percent more job applications than people with “white-sounding names” just to get a call back. It gets worse. Black workers who are lucky enough to find employment are disciplined and fired at a much greater rate than their white counterparts. The higher up the pay scale you go, for every $10,000 increase in pay, blacks’ percentages of holding that job falls by 7 percent compared to whites.

The disparities explode in our neighborhoods and communities. About 74 percent of white Americans own homes, compared to just 40 percent of Blacks Americans. The gap between median household income for whites (about $91,000) compared to Blacks (about $3,000) is staggering, and that gap has tripled in just the past 25 years. The median net worth of white American families is about $265,000, while it was just $23,500 for Black Americans.

A Black man is five times more likely to be searched at a traffic stop, and six times more likely to go jail than a white person. Blacks make up nearly 45 percent of arrests for violent crimes. Black Americans are pulled over (and subsequently jailed) more frequently because they’re more prone to criminal behavior. They’re pulled over much more frequently because there is an “implicit racial association of Black life with dangerous or aggressive behavior”, the Sentencing Project found. The numbers get outrageous in certain parts of the country, the project found. On the New Jersey Turnpike, for instance, Black Americans make up 15 percent of drivers, more than 40 percent of stops and 73 percent of arrests – even though they break traffic laws at the same rate as whites. In New York City, Blacks and Hispanics were three and four times as likely to be stopped and frisked as whites.

But the disparities become appalling in court. If a Black American kills a white person, they are five times as likely to receive the death sentence as a white person who kills a Black person. Local prosecutors are much more likely to upgrade a case to felony murder if you’re Black than if you’re white. Juries are stacked against you if you’re Black. Racial bias in jury selection is ridiculous. Qualified Black jurors are illegally turned away as much as 85 percent of the time in the jury selection process. The result? About a quarter of juries in death penalty cases have no Black jurors, and more than two-thirds have two or less. When a Black person is accused of killing a white person – and the jury consists of five or more white males – the odds go way up for a death penalty verdict. Defense lawyers, and prosecutors, know that having just a single black man on the jury substantially changes the odds.

Black Americans stay in prison longer than white people – up to 40 percent longer than white people serving time for essentially similar crimes. They get much harsher sentences. Black Americans are 44 percent more likely to be sentenced to death than white people for the same crimes. And the color of the skin of the victims matters greatly in the punishment for capital crimes. Whites and Blacks represent about half of murder victims from year to year, but 77 percent of people who are executed killed a white person, while only 13 percent of death row executions represent those who killed a Black person.

We could cite hundreds of other statistics, much like these. And we haven’t even touched on efforts to suppress voting, unbalanced responses to riots or the bizarre inequities in the never-ending war on drugs. What they all point to quite clearly is that Black life redlining exists in nearly every corner of American society today and is what is driving the tension we are seeing on the streets across America. The root causes are what we must deal with, not the symptoms.

So, the next time you see someone questioning what or whether Black life redlining exists in America, there’s an obvious answer to the question. Some may not like it but pretending that it doesn’t exist isn’t going to change anything either.